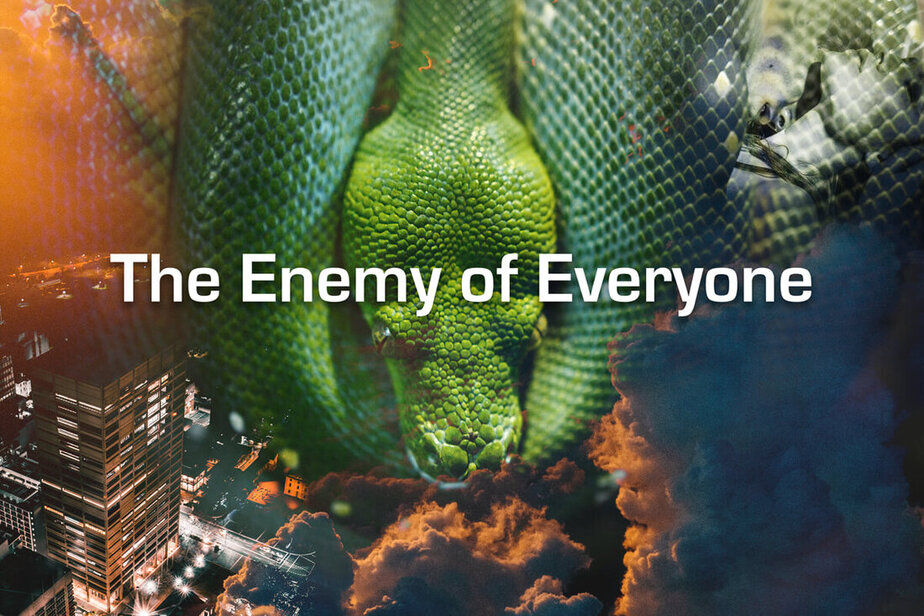 The Enemy of Everyone

Look how you have fallen from the sky,
O shining one, son of the dawn!
You have been cut down to the ground,
O conqueror of the nations!
13 You said to yourself,
‘I will climb up to the sky.
Above the stars of El
I will set up my throne.
I will rule on the mountain of assembly
on the remote slopes of Zaphon.
14 I will climb up to the tops of the clouds;
I will make myself like the Most High!’
15 But you were brought down to Sheol,
to the remote slopes of the Pit. (Isa. 14:12-15)

The LORD’s message came to me: 12 “Son of man, sing a lament for the king of Tyre, and say to him, ‘This is what the Sovereign LORD says:
“‘You were the sealer of perfection,
full of wisdom, and perfect in beauty.
13 You were in Eden, the garden of God.
Every precious stone was your covering,
the ruby, topaz, and emerald,
the chrysolite, onyx, and jasper,
the sapphire, turquoise, and beryl;
your settings and mounts were made of gold.
On the day you were created they were prepared.
14 I placed you there with an anointed guardian cherub;
you were on the holy mountain of God;
you walked about amidst fiery stones.
15 You were blameless in your behavior from the day you were created,
until sin was discovered in you.
16 In the abundance of your trade you were filled with violence, and you sinned;
so I defiled you and banished you from the mountain of God--
the guardian cherub expelled you from the midst of the stones of fire.
17 Your heart was proud because of your beauty;
you corrupted your wisdom on account of your splendor.
I threw you down to the ground;
I placed you before kings, that they might see you.
18 By the multitude of your iniquities, through the sinfulness of your trade,
you desecrated your sanctuaries.
So I drew fire out from within you;
it consumed you,
and I turned you to ashes on the earth
before the eyes of all who saw you.
19 All who know you among the peoples are shocked at you;
you have become terrified and will be no more.’” (Ezk. 28:11-19)

Next I saw Joshua the high priest standing before the angel of the LORD, with Satan standing at his right hand to accuse him. 2 The LORD said to Satan, “May the LORD rebuke you, Satan! May the LORD, who has chosen Jerusalem, rebuke you! Isn’t this man like a burning stick snatched from the fire?” (Zec 3:1,2)

Then Jesus was led by the Spirit into the wilderness to be tempted by the devil. 2 After he fasted forty days and forty nights he was famished. 3 The tempter came and said to him, “If you are the Son of God, command these stones to become bread.” 4 But he answered, “It is written, ‘Man does not live by bread alone, but by every word that comes from the mouth of God.’” 5 Then the devil took him to the holy city, had him stand on the highest point of the temple, 6 and said to him, “If you are the Son of God, throw yourself down. For it is written, ‘He will command his angels concerning you’ and ‘with their hands they will lift you up, so that you will not strike your foot against a stone.’” 7 Jesus said to him, “Once again it is written: ‘You are not to put the Lord your God to the test.’” 8 Again, the devil took him to a very high mountain, and showed him all the kingdoms of the world and their grandeur. 9 And he said to him, “I will give you all these things if you throw yourself to the ground and worship me.” 10 Then Jesus said to him, “Go away, Satan! For it is written: ‘You are to worship the Lord your God and serve only him.’” 11 Then the devil left him, and angels came and began ministering to his needs. (Mat. 4:1-11)

He [Jesus] presented them with another parable: “The kingdom of heaven is like a person who sowed good seed in his field. 25 But while everyone was sleeping, an enemy came and sowed darnel among the wheat and went away. 26 When the plants sprouted and produced grain, then the darnel also appeared. 27 So the slaves of the landowner came and said to him, ‘Sir, didn’t you sow good seed in your field? Then where did the darnel come from?’ 28 He said, ‘An enemy has done this!’ So the slaves replied, ‘Do you want us to go and gather it?’ 29 But he said, ‘No, since in gathering the darnel you may uproot the wheat along with it. 30 Let both grow together until the harvest. At harvest time I will tell the reapers, “First collect the darnel and tie it in bundles to be burned, but then gather the wheat into my barn.”’”(Mat. 13:24-30)

Now he [Jesus] was casting out a demon that was mute. When the demon had gone out, the man who had been mute began to speak, and the crowds were amazed. 15 But some of them said, “By the power of Beelzebul, the ruler of demons, he casts out demons!” 16 Others, to test him, began asking for a sign from heaven. 17 But Jesus, realizing their thoughts, said to them, “Every kingdom divided against itself is destroyed, and a divided household falls. 18 So if Satan too is divided against himself, how will his kingdom stand? I ask you this because you claim that I cast out demons by Beelzebul. 19 Now if I cast out demons by Beelzebul, by whom do your sons cast them out? Therefore they will be your judges. 20 But if I cast out demons by the finger of God, then the kingdom of God has already overtaken you. 21 When a strong man, fully armed, guards his own palace, his possessions are safe. 22 But when a stronger man attacks and conquers him, he takes away the first man’s armor on which the man relied and divides up his plunder. 23 Whoever is not with me is against me, and whoever does not gather with me scatters.
24 “When an unclean spirit goes out of a person, it passes through waterless places looking for rest but not finding any. Then it says, ‘I will return to the home I left.’ 25 When it returns, it finds the house swept clean and put in order. 26 Then it goes and brings seven other spirits more evil than itself, and they go in and live there, so the last state of that person is worse than the first.”
27 As he said these things, a woman in the crowd spoke out to him, “Blessed is the womb that bore you and the breasts at which you nursed!” 28 But he replied, “Blessed rather are those who hear the word of God and obey it!” (Luke 11:14-28)

When they came to the crowd, a man came to him, knelt before him, 15 and said, “Lord, have mercy on my son, because he has seizures and suffers terribly, for he often falls into the fire and into the water. 16 I brought him to your disciples, but they were not able to heal him.” 17 Jesus answered, “You unbelieving and perverse generation! How much longer must I be with you? How much longer must I endure you? Bring him here to me.” 18 Then Jesus rebuked the demon and it came out of him, and the boy was healed from that moment. 19 Then the disciples came to Jesus privately and said, “Why couldn’t we cast it out?” 20 He told them, “It was because of your little faith. I tell you the truth, if you have faith the size of a mustard seed, you will say to this mountain, ‘Move from here to there,’ and it will move; nothing will be impossible for you.” (Mat. 17:14-20)

The seventy-two returned with joy and said, “Lord, even the demons submit to us in your name.”
18 He replied, “I saw Satan fall like lightning from heaven. 19 I have given you authority to trample on snakes and scorpions and to overcome all the power of the enemy; nothing will harm you. 20 However, do not rejoice that the spirits submit to you, but rejoice that your names are written in heaven.” (Luke 10:17-20)
And what I am doing I will continue to do, so that I may eliminate any opportunity for those who want a chance to be regarded as our equals in the things they boast about. 13 For such people are false apostles, deceitful workers, disguising themselves as apostles of Christ. 14 And no wonder, for even Satan disguises himself as an angel of light. 15 Therefore it is not surprising his servants also disguise themselves as servants of righteousness, whose end will correspond to their actions. (2 Cor. 11:12-15)
But someone will say, “You have faith and I have works.” Show me your faith without works and I will show you faith by my works. 19 You believe that God is one; well and good. Even the demons believe that—and tremble with fear. (Jas. 2:18,19)

Yet these men, as a result of their dreams, defile the flesh, reject authority, and insult the glorious ones. 9 But even when Michael the archangel was arguing with the devil and debating with him concerning Moses’ body, he did not dare to bring a slanderous judgment, but said, “May the Lord rebuke you!” 10 But these men do not understand the things they slander, and they are being destroyed by the very things that, like irrational animals, they instinctively comprehend. (Jude 1:8-10)

For these are the kind who do not serve our Lord Christ, but their own appetites. By their smooth talk and flattery they deceive the minds of the naive. 19 Your obedience is known to all and thus I rejoice over you. But I want you to be wise in what is good and innocent in what is evil. 20 The God of peace will quickly crush Satan under your feet. The grace of our Lord Jesus be with you. (Rom. 16:18-20)

Who is wise and understanding among you? By his good conduct he should show his works done in the gentleness that wisdom brings. 14 But if you have bitter jealousy and selfishness in your hearts, do not boast and tell lies against the truth. 15 Such wisdom does not come from above but is earthly, natural, demonic. 16 For where there is jealousy and selfishness, there is disorder and every evil practice. (Jas 3:13-16)

Be sober and alert. Your enemy the devil, like a roaring lion, is on the prowl looking for someone to devour. 9 Resist him, strong in your faith, because you know that your brothers and sisters throughout the world are enduring the same kinds of suffering. (1 Pet. 5:8,9)
​
Finally, be strengthened in the Lord and in the strength of his power. 11 Clothe yourselves with the full armor of God, so that you will be able to stand against the schemes of the devil. 12 For our struggle is not against flesh and blood, but against the rulers, against the powers, against the world rulers of this darkness, against the spiritual forces of evil in the heavens. 13 For this reason, take up the full armor of God so that you may be able to stand your ground on the evil day, and having done everything, to stand. 14 Stand firm therefore, by fastening the belt of truth around your waist, by putting on the breastplate of righteousness, 15 by fitting your feet with the preparation that comes from the good news of peace, 16 and in all of this, by taking up the shield of faith with which you can extinguish all the flaming arrows of the evil one. 17 And take the helmet of salvation and the sword of the Spirit (which is the word of God). 18 With every prayer and petition, pray at all times in the Spirit, and to this end be alert, with all perseverance and petitions for all the saints. (Eph. 6:10-18) 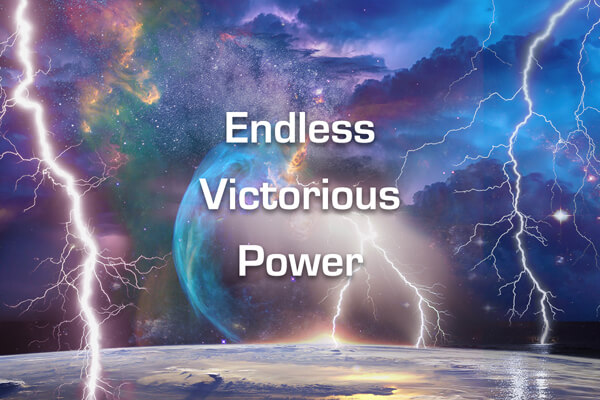